Recently, I had the pleasure of attending the book launch for T. Kenny Fountain’s Rhetoric in the Flesh: Trained Vision, Technical Expertise, and the Gross Anatomy Lab. At the event, Fountain discussed some of the key arguments from the book, and shared anecdotes from his participant observation in the human gross anatomy lab. 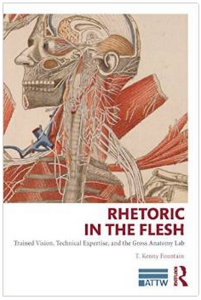 Fountain’s text is an ethnographic account penned from the perspective of a rhetorician of science communication. His focus on language offers a lens into anatomical learning and clinical training that is at once pointed and engrossing. Through his account, Fountain reveals the underlying relationships and tensions between students of anatomy and the bodies they dissect.

As I learned from the book launch talk and from an initial reading of the text, one term that Fountain’s participants in the laboratory frequently returned to was “making.” This word appears counterintuitive, given that dissection entails acts that are more closely associated with destruction than creation: scraping fat from tissues, disarticulating bones, removing organs to see structures beneath of them. However, “making” meant something quite particular to those who carried out dissections.

Students, instructors, and teaching assistants in the cadaver laboratories employed “making” to describe cutting and preparing the corpse in ways that would mimic the beautifully colored, flawlessly sketched anatomical drawings in their medical atlases. To dissect a body in a careful fashion that would reveal biological structures as cleanly and as clearly as the textbooks was to “make” the body, both into a mimicry of the visuals in the textbooks, and into a body that was representative of what the books deemed anatomical truth. Some students alternatively deemed this process “Netterizing,” or rendering their cadaver’s anatomy to appear as manifestly as the eminent anatomical artist and physician Frank Netter did in his illustrations.

Yet bodies can be “made” by more than the students and faculty alone. Fountain’s text also argues that bodies can make themselves. In one case, a woman who donated her body to science accompanied her anatomical gift with a letter. The letter contained details of the domestic abuse she suffered, as she explained the scars medical students would discover on her skin when they began to dissect her. The woman cast her body in a context that the students who received her body, and read her correspondence, could not ignore when considering the conditions under which that body lived and died. This woman “made” her body a representation of its life, its embodied struggles, and its significance as a precious gift to the students who received it.

Cadavers can also “make” themselves in death. One cadaver in the laboratory Fountain observed at had late-stage cancer that had not been reported on her medical records before she was embalmed for dissection. The cancerous tissue was stiff and impossible to cut through. It obscured structures, encased organs, and halted the dissection. In this instance, the cadaver makes itself both anomalous– by not representing “true” anatomical structures like the textbooks– and simultaneously representative of the reality of disease, which medical students will confront as future physicians.

For linguistic and medical anthropologists alike, as well as all humanistic scholars of medicine, Fountain’s book presents fresh analysis on an age-old tradition of medical learning: anatomical dissection. By attending closely to the language used to describe bodies, the language used by donors to describe their own bodies, and to the visual displays that mediate experience in anatomical learning, Fountain provides an innovative account that blends science and technology studies, visual studies, and rhetorical research.

You can learn more about and purchase Rhetoric in the Flesh here:

A similar version of this post appears at the Dittrick Museum blog, which you may find here: