Debuting May 2015 from the University of Chicago Press is Nick Hopwood’s Haeckel’s Embryos: Images, Evolution, and Fraud. The book describes the lasting cultural impact of 19th-century illustrations that demonstrate the identical appearance of human and other vertebrate embryos in the earliest stages of gestation, only later morphing into their adult-like forms. These drawings, produced by Darwinist Ernst Haeckel in 1868, caused an uproar in the scientific community at the time as well as in the 1990s, when biologists and creationists alike argued against their accuracy and inclusion into scientific textbooks. 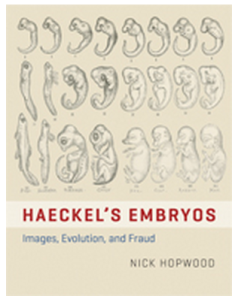 Hopwood traces the heated history of Haeckel’s drawings from their initial publication in the 19th century through their controversial presence in the current age. In addition to considering the impact of these images on developing understandings of biology, Haeckel simultaneously draws attention to the continued power of these images in contemporary discourse. The book will prove of interest to scholars of medicine who are curious about how popular as well as scientific knowledge of the human body is shaped by visual media, as well as how scientific information is culturally and historically situated.

Nick Hopwood is Reader in History of Science and Medicine and the Director of Graduate Studies at the University of Cambridge’s Department of History and Philosophy of Science.

To learn more about the book, check out its feature page at UCP here: http://www.press.uchicago.edu/ucp/books/book/chicago/H/bo18785800.html