This week we are highlighting a book review written by Veronica Tomasic originally published in MedHum Daily Dose, a blog for the intersections of medicine and humanities, available here. The book is entitled A Surgeon in the Village: An American Doctor Teaches Brain Surgery in Africa (2017) by Tony Bartelme, published by Beacon Press. 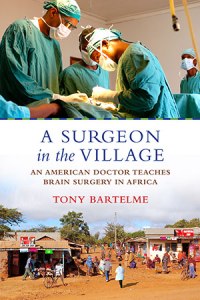 A Surgeon in the Village: An American Doctor Teaches Brain Surgery in Africa (Beacon Press, 2017) is the story of American neurosurgeon Dr. Dilan Ellegala’s efforts to provide medical aid in Tanzania. It was written by Tony Bartelme, an American reporter for Charleston, South Carolina’s Post and Courier; Bartelme is a three time Pulitzer prize finalist, including for the series that formed the basis for this book. The Post and Courier’s executive editor relayed a story to Bartelme about a “crazy brain surgeon who opened a guy’s head with a wire saw in Africa”; Bartelme’s interest was piqued and thus began the story that he narrates here (269).

A Surgeon in the Village is a bildungsroman of sorts. It describes the beginning of Ellegala’s career as a neurosurgeon and his personal journey toward finding meaning in his work. It is also about his ideas for how foreign medical aid should be delivered, and the growth of an organization, Madaktari Africa (Madaktari means doctors in Swahili), that he formed as a result of his ideas.

We first meet Ellegala when he has just completed his neurosurgery training in the US. He is burned out after years of grueling residency and fellowship programs. He travels to Tanzania for six months, volunteering to perform brain surgery at a small, remote hospital. Ellegala is determined to spend as much time as possible vacationing while there. But his plan changes after he starts to attend daily morning meetings where the visiting foreign students and MDs, and local medical personnel gather to discuss their cases. Ellegala observes that the foreign students sit in a privileged position at the front of the room, while the local personnel — such as assistant medical officers (or “AMOs,” who have paramedic plus a few years’ level of training) — stand at the back of the room. This disturbs his sense of propriety — in the US, medical students typically stand or sit behind attendings and residents. He insists that the students and local personnel trade places, a shift that becomes a central organizing metaphor for the book. The change symbolizes the degree of responsibility Ellegala believes the local staff should have for the care they provide, and the respect he feels they should be shown by foreign visitors.

Galvanized, Ellegala starts to rethink traditional models for providing aid in Tanzania, a country with limited resources to train and keep its own MDs. Rather than encourage foreign MDs to travel to a hospital, perform surgeries for a brief period of time and then leave, Ellegala realizes that it makes more sense to train local AMOs to perform neurosurgical procedures. If they can take over, he reasons, a hospital will transition from being dependent on outside help to being self-sustaining. Ellegala notices an AMO who has a surgeon’s confidence about him, Emmanuel Mayyega, and he trains him to diagnose and perform operations for a number of conditions, such as intracranial tumors, head trauma, and hydrocephalus. Eventually, Mayyega trains others. And thus began the “train forward” movement in Tanzania.

Bartelme weaves through his account the challenges Ellegala faces in his career as he devotes time, money, and considerable energy to Madaktari Africa. He also describes some of the ethical issues that are raised by the “train forward” practice. For example, should we accept that people will die in countries where there are not enough traditionally-trained MD surgeons to perform surgeries? Or should surgeries in these countries be performed by people with limited training and supervision because they can save lives? And what about the liability exposure for people trained under such circumstances? One area where the book could have been strengthened would have been to devote a chapter to the history of aid organizations and their varied philosophies. While mention of organizations such as Smile Train, or Paul Farmer’s Partners in Health, among others, are interspersed throughout the book, it was never clear to me whether Ellegala was the first person to conceptualize “train forward,” or whether such a practice had already been established in other countries.

Altogether, A Surgeon in the Village is a warmly engaging account of one doctor’s efforts to make a difference in a part of the world that has limited medical resources, and the personal rewards his efforts afforded him. It would be useful for medical providers and students to read, as well as anyone interested in how best to provide aid to other countries.

For more information about the book, visit the Beacon Press website, here.

One thought on “Book Review: “A Surgeon in the Village””