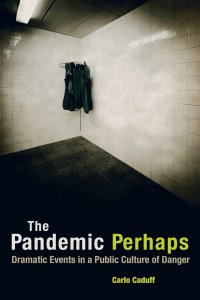 Released this August 2015 from University of California Press is Carlo Caduff’s The Pandemic Perhaps: Dramatic Events in a Public Culture of Danger. In the text, Caduff focuses on alerts in 2005 posted by American experts about a deadly, approaching influenza outbreak. These urgent messages warned that the outbreak would have crippling effects on the economy and potentially end the lives of millions of people. Even though this potentially-catastrophic outbreak ultimately never occurred, preparedness efforts for the slated pandemic carried on.

The text is the product of anthropological fieldwork carried out amongst public health agents, scientists, and other key players in New York City surrounding the influenza scare. Caduff demonstrates how these figures framed the potential outbreak, and how they sought to capture the public’s attention regarding the disease. The book grapples with questions about information, perceived danger, and the meaning of safety in the face of large-scale epidemics. Likewise, Caduff examines how institutions and individuals come to cope with the uncertainty of new outbreaks.

The book will be of interest to cultural medical anthropologists as well as epidemiologists and scholars in public health. Caduff’s work will no doubt shed a timely new light on the way that the threat of epidemics shapes health policy and public perceptions of disease and security.

Caduff is Lecturer in the Department of Social Science, Health, and Medicine at King’s College London. His research addresses the anthropology of science, technology, and medicine, as well as issues surrounding knowledge, expertise, safety, and disease.

For more information on the book, visit the publisher’s website here: http://www.ucpress.edu/book.php?isbn=9780520284098