In the next few blog updates, we will be spotlighting new articles from our June 2016 issue, which you can access in full here. The theme of this special issue is The Clinic in Crisis: Medicine and Politics in the Context of Social Upheaval. This week, we will overview Salih Can Aciksoz’s article “Medical Humanitarianism Under Atmospheric Violence: Health Professionals in the 2013 Gezi Protests in Turkey.” Read the full article here.

Aciksoz’s article begins by painting a scene. In the summer of 2013, protests erupted throughout Turkey, leading to violent clashes between armed police forces and civilian protestors. Humanitarian health workers began to establish make-shift infirmaries near known sites of conflict to treat wounded protestors, yet soon themselves became targets of the police who directed tear gas and turned their weapons upon the infirmaries. Those tasked with quashing riots and subduing protests soon fixed their ire on the health professionals who cared for wounded protestors: viewing these clinicians not as neutral aid workers, but instead as complicit members of the uprisings they were attempting to quell. In time, emergency healthcare offered to protestors was deemed criminal activity by the Turkish government.

The author frames the Gezi Protests in terms of the security of medical spaces. Medical humanitarianism, he notes, is premised on the neutrality of care giving centers which serve as a “safe space” for medical aid to be delivered in times of “crisis” to anyone in need. However, this designation as a safe space relies on the authority of a state to recognize it as such. The Turkish government’s criminalization of the humanitarian infirmaries aligned health professionals with protestors, despite any claims to political neutrality. In Turkey, the ability for make-shift infirmaries to serve as neutral care centers was further threatened by the use of a particular weapon: tear gas and similar chemical weapons. An indiscriminate gas could transform entire physical areas– especially enclosed ones– into dangerous structures where all people were at risk of exposure. The use of gas by police forces inside clinics prevented these spaces from being both politically neutral and medically safe for patients and health professionals within.

The state’s designation of infirmaries as a site of criminal activity, and health professionals’ attendance to protestors as insurgent, did not always align with the accounts that Ackisoz collected from Turkish clinicians themselves. Even whenever health professionals confessed that they sympathized with the cause of the protestors, they nevertheless distinguished their political beliefs from their medical obligation. Many described their medical involvement with the protests as a natural response to crisis: as understandable as if they were responding to victims of an earthquake or other disaster. Yet their work also bordered on activism, as numerous clinicians sought to aid protestors after noting the failures of state-operated hospitals and ambulances to attend to the medical needs of all injured protestors.

In sum, Ackisoz argues that what constitutes “medical humanitarianism” borders on many other domains of society: on the state, on the government’s definition of both criminality and on appropriate use of force, on what constitutes political dissidence and whether or not “humanitarianism” is strictly neutral whenever any medical action has the potential to shed light on political failings. The article demonstrates that the ethnographic and social constructivist lenses are well-suited to the analysis of the troubled boundaries between politics and medicine, and between healing and the state in periods of upheaval.

First made available online last month, Culture, Medicine & Psychiatry has released its most recent lists of books received for review at the journal (which you can access on our publisher’s website at this link.) These books include Carlo Caduff’s The Pandemic Perhaps: Dramatic Events in a Public Culture of Danger and Janis Jenkins’ Extraordinary Conditions: Culture and Experience in Mental Illness. Last year, we featured Caduff’s text (here) and Jenkin’s text (here) in book release features here on the blog.

The journal has also received the following two books for review. Here are the two releases: 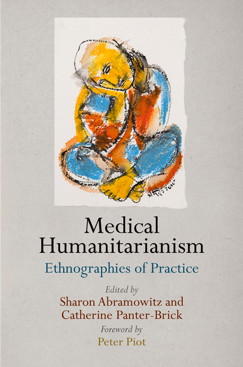 New from the University of Pennsylvania Press is a collection of essays entitled Medical Humanitarianism: Ethnographies of Practice (available here.) Edited by Sharon Abramowitz and Catherine Panter-Brick, with a foreword by Peter Piot, the book explores the experiences of health workers and other practitioners who deliver humanitarian medical aid throughout the world. The book promises a “critical” yet “compassionate” account of humanitarian projects spanning Indonesia, Ethiopia, Haiti, Liberia, and other nations.

From Cornell University Press comes Gabriel Mendes’ Under the Strain of Color:
Harlem’s Lafargue Clinic and the Promise of an Antiracist Psychiatry (available here.) This historical text examines a mental health clinic in the 1940s established to treat psychiatric complaints amongst a primarily black, urban, underserved population. Unlike other treatment centers for mental illness at the time, the Lafargue Clinic was unique in its emphasis on the medical as well as the social contexts in which its patients experienced distress. The clinic challenged existing notions of “color-blind” psychiatry and became both a scientific and equally political institution, highlighting the “interlocking relationships” between biomedicine, the state, racial inequity, and community-based health care.