This week on the blog, we are highlighting an upcoming conference on global psychotherapies across geography and time. This feature was written by our CMP social media intern Sonya Petrakovitz, PhD student in anthropology at Case Western Reserve University.

“Other Psychotherapies – across time, space, and culture”

This conference brings contemporary forms of Western knowledge about mental health and well-being into dialogue with psychotherapeutic approaches from ‘other’ geographically, historically, or otherwise ‘distant’ cultures. Specifically, presentations will address ancient and medieval approaches to psychotherapy and how those techniques have become incorporated into today’s approaches. The sessions will also explore the development of psychological practices over time and across changing spatialities of care practices, specifically how post-colonial and indigenous forms of healing influenced the perceived credibility of psychotherapies. They will likewise examine the therapeutic/salutogenic dimensions of subcultures.

Addressing psychotherapy in this way brings together multiple disciplines and expands our understandings of medicine, health, culture, therapies, and pedagogies. The themes of the conference would be of interest to historians, physicians, literary scholars, mental health practitioners, anthropologists, and anyone interested in learning about different perspectives on psychotherapies within a broader global context.

For interested applicants, visit the Call for Papers page at http://otherpsychs.academicblogs.co.uk/. The Conference Committee invites abstracts of up to 300 words for 20-minute presentations, to be submitted by no later than August 31, 2016. Abstracts should be emailed to  arts-otherpsychs@glasgow.ac.uk along with a short biography of 100 words or less.

When medical anthropologists consider the impacts of technology on human health, we envision life-saving drugs, surgeries, or diagnostic tools to detect disease. Technology in these ways can prove instrumental– quite literally — in improving patients’ health outcomes. However, it is equally important to think about the ways in which technology can diminish health, particularly in an age where the global spread of technology deserves the attention of clinicians and anthropologists alike.

This is the nature of the concern posed by the latest World Health Organization (WHO) report, released on February 27th 2015. After studying noise exposure in middle and high income countries and among participants ages 14-35, WHO officials stated that an estimated 1.1 billion people are at risk for hearing loss due to “recreational noise.” This includes music piped through headphones and noise experienced at entertainment venues. Exposure to high decibels of sound is not itself harmful: for instance, hearing a heavy pot fall from the counter and crash onto the floor would not cause hearing damager. Rather, the extended length of exposure to such loud noises is what proves detrimental. The WHO defines dangerous levels of noise exposure as 85 decibels for eight hours or 100 decibels for 15 minutes. The report notes that a rock concert that lasts for two hours may cause temporary hearing loss or lead to other symptoms such as a ringing sensation in the ears, and regular extended exposure may lead to more permanent damage. 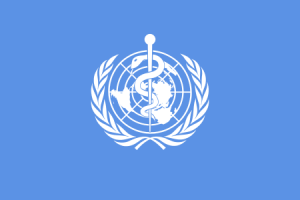 The WHO flag, via Wikimedia Commons

What does the WHO recommend to address this global health concern? The report singles out teenagers and implores them to take noise management into their own hands: purchasing noise-canceling headphones, taking “sound breaks” if extended exposure to loud sounds is unavoidable, or wearing ear plugs to loud music venues. This places the responsibility to manage noise exposure on young people rather than on their families and caregivers. Likewise, the report suggests that patrons of entertainment venues like clubs and bars that feature loud music and sounds should limit their time spent in such environments. There are no extensive recommendations listed in the report for those who work in loud venues, other than limiting shifts to eight hours to shorten exposure.

From a medical anthropological standpoint, many of the factors in sound environments are tangled with social life. For instance, in many developed countries, concerts are an important social gathering place for young people. Teens may not avoid these events, but if they follow the WHO recommendations and wear earplugs to the venue, they may be ostracized by their peers for looking out of place. Likewise, neighborhood bars and clubs are important hubs of activity for locals, and avoiding them may come at the cost of social isolation. As technologies spread both to developing and developed countries, the ways that people integrate audio technologies, new entertainment venues, and popular music into their lives is worth considering given the impacts of these tools, sounds, and social spaces on hearing health.

In our “Current Issue Highlight” series, we provide brief synopses of some of the original articles and commentaries published in our latest issue of Culture, Medicine, and Psychiatry. We hope these glimpses into our recent publications serve as a taste of the research we publish, as well as offer fresh insights on the intersections of culture, disease, health, and healing.

“This article,” the abstract begins, “investigates the ambivalence of front-line mental health clinicians toward their power to impose treatment against people’s will.” Ambivalence is itself a psychological construct that describes the tensions between love and hate, or multiple perspectives, within both individual subjects as well as the collective social group: here, psychiatric health workers. Central to this article is the friction generated between the clinicians’ self-concept as caregivers and their professional drive to control patients. Such ambivalence about clinical work in psychiatry is evident in the ethnographic research presented here.

Brodwin’s piece reminds us that anthropology is perfectly situated to draw meaning from these problematic and conflicted perspectives within a social group. Rather than reconciling the participants’ feelings and drawing one universal message from them, Brodwin presents us with an authentic picture of the complicated world of clinical psychiatric practice. He concludes, “To understand the paradox, fieldwork should focus especially on the moments when people’s sense of unease erupts into collective life.”

“A Village Possessed by ‘Witches’: A Mixed-Methods Case–Control Study of Possession and Common Mental Disorders in Rural Nepal”

In this article, the authors probe an important question: if we consider spirit possession and psychopathology as separate categories, rather than assume possession as a form of mental illness, how might we describe mental illness within a population who has experienced spirit possession? For societies in which spirit encounters are frequent and socially normative, reading mental illness as distinct from possession is particularly critical when exploring local psychic events.

Nepal provided fertile intellectual grounds for exploring this question because spiritual possession occurs regularly. When the researchers delivered educational sessions on psychosomatic and psychosocial illnesses, suggesting that spirit possession might be a type of mental distress, villagers in the study resisted this notion. They argued that possession was rooted in cosmological and supernatural disturbances, making them altogether different psychological phenomena.

Instead of casting possession as a brand of psychiatric illness, the authors suggest that we might view possession as a coping mechanism against other mental duress. In another way, we could conceive of possession as a cultural idiom of distress: reframing illness in terms of a socially acceptable category of experience that is widely shared.

“Confinement and Psychiatric Care: A Comparison Between High-Security Units for Prisoners and for Difficult Patients in France”

Focusing on French mental health care, this article explores the evolving use of confinement as part of the treatment of mentally ill individuals who exhibit violent behavior. The authors parallel the nature of confinement in French psychiatric wards to the security practices of high-security prison units.

In their research, Velpry and Eyraud discovered that the public appeal to heightened security in psychiatric institutions, as well as executive action from the president, led to a “turn” towards new confinement measures. Second, psychiatrists used this new narrative of control to justify control techniques that they argued gave patients “psychic structure.” Rather than standing as its own therapeutic measure, physicians employed confinement as a means of managing “difficult” patients.

As an object of inquiry, this recent trend in French psychiatry recalls the complementary trajectories of care and justice, power and control, as well as reflects on the changing landscape of what we define as therapy.

“Psychiatry with Teeth: Notes on Coercion and Control in France and the United States”

This commentary piece on the articles published in the current issue highlights the “rough edge” of the use of constraint and coercion to subdue “difficult” psychiatric patients. Lovell and Rhodes note that many of the articles demonstrate how these forms of discipline and control are enacted at the local scale, and remind us that the exchange between psychiatric patient and the care institution is the site of the strongest conflict when we look at systems of control. What is the border between “care and custody,” the issue asks? How do we as anthropologists contribute to the knowledge about these complex social interactions?

Furthermore, the authors observe that the geographic emphasis on psychiatric care in France and the United States is hardly accidental. Although care practices for the mentally ill differ widely between the two countries, the focus on constraint and control is similarly present in the scholarly literature produced on psychiatry in each place. Likewise, in French and American research, there is a mutual tendency to study mental health care in terms of autonomy, freedom, humanism, and democracy.

Want to see a preview and abstracts of all the articles in the current issue? Find details on the full issue here: http://link.springer.com/journal/11013/38/4/page/1

In this special feature on the blog, we’re highlighting recent book publications that have been submitted for review to Culture, Medicine, and Psychiatry. This week, we are pleased to present a short overview of Making and Unmaking Public Health in Africa: Ethnographic and Historical Perspectives, a volume of works edited by Ruth J. Prince and Rebecca Marsland. This book addresses the experience of African public health initiatives from numerous vantage points. Published by the Ohio University Press, a paperback version was released in December 2013. You can learn more about the book here: http://www.ohioswallow.com/book/Making+and+Unmaking+Public+Health+in+Africa.

Prince and Marsland’s edited collection was the result of a 2008 workshop at the University of Cambridge hosted by the Centre of African Studies and the Department of Social Anthropology. Africa has long served as an “arena” for discussions about global health, human rights, and humanitarian aid, but the notion of health-for-all is complicated against a backdrop of African state formation, international interventions, and transnational policies.

This text explores what public health means for clinical professionals, patients, government officials, and citizens throughout Africa. Instead of generalizing what the meaning of public health to these groups might be, this book aims to establish a rich, complex anthropology of African public health that weighs the importance of politics, culture, and local understanding to the definition and delivery of public health initiatives. The volume covers topics in numerous countries including Uganda, Nigeria, Kenya, and Tanzania, and takes a blended historical-anthropological approach to studying public health.

These brief summaries are intended to give our readers a glimpse into the newest academic publications that we’re excited to discuss in our journal and with our followers on social media. For a full list of books that have been submitted for review at CMP, click this link: http://link.springer.com/article/10.1007/s11013-014-9383-x. This page also has information regarding the submissions process for authors who’d like their academic releases reviewed in the journal, as well as information for those interested in composing a review. For more information on this process, please contact managing editor Brandy Schillace.